Back to all posts

Next shows coming up are in July, a special Remembering Mikey run!

“Remembering Mikey,” the band led by Sam Holt, honoring Michael Houser’s music, is back on the road this summer with a beach run this July. The shows will feature Houser originals, songs from Houser’s posthumous release Sandbox, as well as Holt’s original songs that written for or inspired by Houser.

The shows will feature Houser originals, from his posthumous release Sandbox, as well as songs he wrote for Widespread Panic.  Holt will also perform a number of songs he wrote for and inspired by Houser.
Sharing the stage with Sam Holt is Adam Grace, keyboardist for Truth & Salvage Co., Ross Parker on bass, and Jeremy Ward on drums making this a show that cannot be missed by Houser fans. 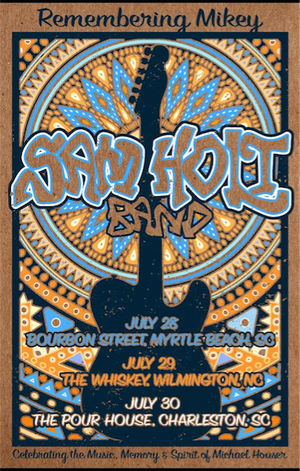